The Nature of Conflict

A conflict is the moment of truth in a relationship-a test of its health, a crisis that can weaken or strengthen it, a critical event that may bring lasting resentment, smouldering hostility, psychological scars.  Conflicts can push people away from each other or pull them into a closer and more intimate union; they contain the seeds of destruction and the seeds of greater unity; they may bring about armed warfare or deeper mutual understanding.

How conflicts are resolved is probably the most critical factor in all relationships.  Unfortunately, most people try to resolve them by using only two basic approaches in which someone wins and someone loses, both of which outcomes are ineffective and harmful to the relationship.

Few persons accept the fact that conflict is part of life and not necessarily bad.  We look on conflict as something to avoid at all costs.  We often hear husbands and wives boast that they have never had a serious disagreement-as if that means theirs has been a good relationship.

Parents tell their children, “All right, there is to be no arguing tonight at the dinner table-we don’t want to spoil our dinner.”  Or they yell, “Stop that arguing, right now!”  Parents of teenagers can be heard lamenting that now that their children are older there are many more disagreements and conflicts in the family.  “We used to see eye to eye on most things.”  Or, “My daughter was always so cooperative and easy to handle, but now we don’t see things her way and she can’t see things our way.”

At home or at work, most of us hate to experience conflict, are deeply trouble when it occurs, and are quite confused about how to handle it constructively.  Actually, it would be a rare relationship if, over a period of time, one person’s needs did not conflict with the other’s.  When any two people (or groups) coexist, conflict is bound to occur just because people are different, think differently, and have needs and wants that sometimes do not match.

Conflict, therefore, is not necessarily bad-it exists as a reality of any relationship.  As a matter of fact, a relationship with no apparent conflict may be unhealthier than one with frequent conflict.  A good example is a marriage where the wife is always subservient to a dominating husband or vice versa, or a boss-subordinate relationship in which the subordinate is so deathly afraid of the boss that s/he does not dare cross him/her in any way.

Most people have known families, especially large families, where conflict crops up constantly and yet these families are wonderfully happy and healthy.  Conversely, we often see newspaper accounts of youthful criminals whose parents indicate complete astonishment that their boy could do such a thing.  They say they never had any trouble with him; he had always been so “cooperative” which is usually a euphemism of “obedient.”

Conflict in a family or a work group, openly expressed and accepted as a natural phenomenon, can be far healthier than most people think.  Members have the opportunity to experience conflict, learn how to cope with it, and be better prepared to deal with it in later life.  And family conflict may actually be beneficial, provided that the conflict in the home gets resolved constructively.

“Deep Listening was one of the most important skills that I got out of the course.  I now have much more honest and open relationships in my workplace, with my friends and in my family.” 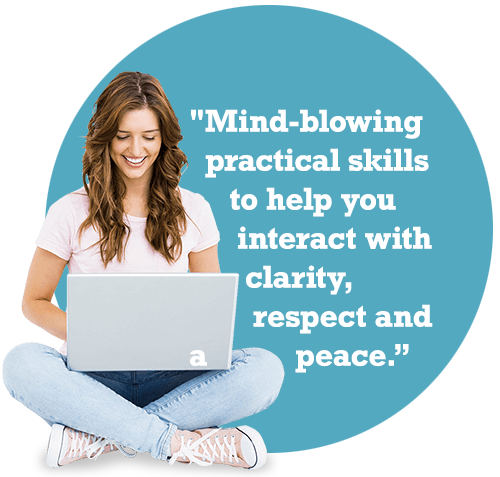